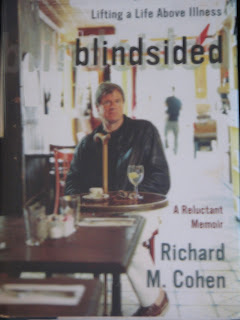 I’ve been reading a lot lately. And I don’t put every book I read on here... But the chronic illness ones and the truly enjoyable occasional fiction read I like to share with others.

The thing that I loved about this book is that it expressed the ups and downs that a lot of us who have chronic illness feel. Some days we are ready to take on the world; other days we can barely even handle ourselves.

Richard Cohen’s memoir, “Blindsided,” is honest. It’s forthright. Sometimes it’s humorous, and sometimes it’s downright depressing. But it’s his story of struggling with multiple sclerosis and colon cancer. He struggles with feeling like he has lost his masculinity, like the very things that make him a man have been called into question by his illnesses.

The part that got to me the most was when Cohen talks about his children.
- His children only know him with his illness.
- There is a chance that they, too, will have multiple sclerosis.

I think a lot of us talk about how we are much more than our illnesses. But the people who come into our lives post-diagnosis know only that part of us. They don’t know anything about our previous lives or are former selves.

I know that my parents, and most parents for that matter, would want to do whatever they could to spare their children pain. I want to have kids someday. But there will always be the question of whether they will have the same issues that I do. So much about chronic illness is about “what ifs”. Obviously when that time comes, I will certainly have some decisions to make.
*****
“I am not just a collection of muscles and nerves, the wiring that has short-circuited my dreams. Who I am, my very identity rests in my head. It is from that fortress, my command post, that my being takes shape. Citizens of sickness, those who suffer from their own assaults on the body and spirit, know disappointment. Ours is a common siege. The battle to control our heads is every bit as important as combating these attacks on our bodies. The psychological war with illness is fought on two fronts, on the battlefield of the mind and in the depths of the heart” (xvi).

Despite bodies that fail and rail against us, I am tempted to agree that most often, our biggest obstacle is our brain. Especially for those of us who educate ourselves about our illnesses. We begin to know so much about our specific conditions that we might as well become doctors. Well, maybe not. But you know what I mean. We become consumed, and yet, every time I go to the doctor, I realize that I cannot begin to compete on that front. I know very little of what there is to know about the body in general. But I think I know too much about my own body.

“Coping is a personal art […] I am learning to cope, certainly the toughest course in my continuing education. And the seminar is never over. For me, coping must be relearned every day. Adjusting is not taught at any famous university […] Learning to live with adversity is instinctive and self-taught. It is the stuff of life (xviii) […] Coping is quiet. There is no fanfare, no confetti. There are no parades. Just a quiet task aimed at emotional well-being, if not survival, pursued in subdued and sober tones and spoken in whispers, not shouts. The formula for successful coping rests in the eye of the beholder. There is no magic. We simply know it when we live it. Making peace is not a one-shot deal but an effort that spans a lifetime” (171).

There is no such word as coped. It may exist in the dictionary, but I think that it always occurs in the present tense. You may say, I have coped with my illness for a long time. But you never say I’ve coped – I’m done coping. I don’t think there’s an end to coping. I do find these passages kind of funny given Cohen’s explicit judgment of the coping of others in “Strong at the Broken Places”.

“We only pretend we own exclusive rights to the truths of our lives so we can assure ourselves we are in control of our fates” (56).

I think when a person loses control of a part of their body and physical functioning, it is easy to push others away, to try and be brave and want to handle everything on our own. This gives people, namely me, a sense that I am still in control of something. Recently I have discovered that this is something that can and should be considered a negative coping mechanism. While it is not necessarily useful, I do see the logic used in considering to adopt it.

“Privacy belongs to those who feel they cannot reveal limitations they will not admit to themselves” (143).

I think this is sort of the crux of why I started my blog. I realized that hiding everything inside was going to get me nowhere, with others or myself. And eventually, in the game of life, our hand is revealed. We can only conceal the cards we play for so long. And for me, I think sooner than later proved to be beneficial. I vacillate, day-to-day, sometimes hour-to-hour about how I feel about what is happening in my life. But I don’t do it alone. There are people there to help me. And there will always be those, no matter what limitations we face, that aren’t going to be accepting. And I’ve learned that those are the people I need to purge from my life.

This is how I feel about the Prednisone. Am I being stupid? Could be. But it’s hard to convince myself that now’s the time to learn lessons about life that some people are never able to. I don’t think I’m a vain person. I’m just trying to maintain control of some part of my body. I think that no matter how rational we think we are or try to be, there is some part of us that is irrational about one thing or another.

“I must rise above the culture of perfection and remember that I can be even if I can do longer do […] We all benefit from greater sensitivity toward others. I learned that lesson long ago and the hard way, to be sure. Disease adds dimension to a person, depth to the soul […] We all need to appreciate ourselves for what we are and stop whining about what we are not” (222, 232).
I think this is true. In order to truly embrace other people’s imperfections, you, yourself, have to be imperfect (and embrace it). And I don’t mean telling yourself you’re not a perfect person, but not really meaning it. As Cohen mentions in other portions of the book, as well, illness makes us more compassionate people than we were before. We are more accepting of others. I think until we have walked a mile in the shoes of others, we cannot truly judge them. I too, have been known, from time to time, to question why a person is the way they are (personality wise). But the thing is, the way we are is what makes us who we are. It makes us the reason why we are unique and exist in the world.
*****
I’m not going to lie. This book was difficult to read. It was filled with a mix of both hope and despair. It was a story, though, that shows how far reaching the affects of chronic illnesses are. Chronic illness doesn’t just affect the person with the disease.
*****
(Cohen, Richard M. Blindsided. New York: Harper Collins, 2004.)
Posted by Leslie at 7:00 AM
Email ThisBlogThis!Share to TwitterShare to FacebookShare to Pinterest
Labels: Chronic Illness, Read This