When You Are “Protected” From Your Protected Health Information (PHI)

I recently had to obtain my medical records from the rheumatologist at Mount Sinai Hospital that I saw while I lived in New York, and the records for my two most recent appointments with my now technically “old” rheumatologist at the University of Michigan Hospital.

Recall that I had obtained all of my other previous medical records from the University of Michigan before I moved to New York, and that was total chaos to the tune of $361.26 (Read: What Happens When Your Medical Records Aren’t Yours?).

Well folks, they’ve done it again.  And by “they,” I mean the medical industrial complex, the geniuses who got the idea that patients should be charged to obtain their own protected health information.  That information is so protected that even, I, the patient, cannot have easy access to it.  That is, of course, unless I pay for it.  So I can access it, but it will cost me more time and money, over and above the cost of living with illness itself.

This time, I legit don’t care about the money.  Between the two requests, I’m out just under $25.  It’s the principle.  I can understand that if you’ve already obtained the full version of your medical records, if you needed additional copies that there might be a charge.  But to obtain any part of your record for the first time?  It simply shouldn’t be allowed.  And if it’s going to be allowed, then these facilities need to follow their own rules and policies, which as far as I can tell, they aren’t. 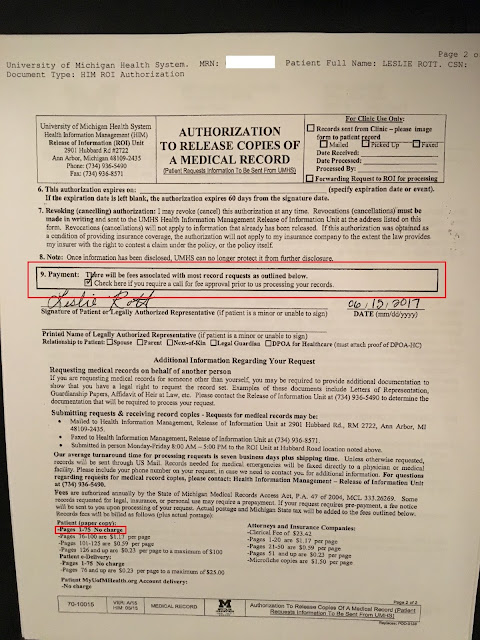 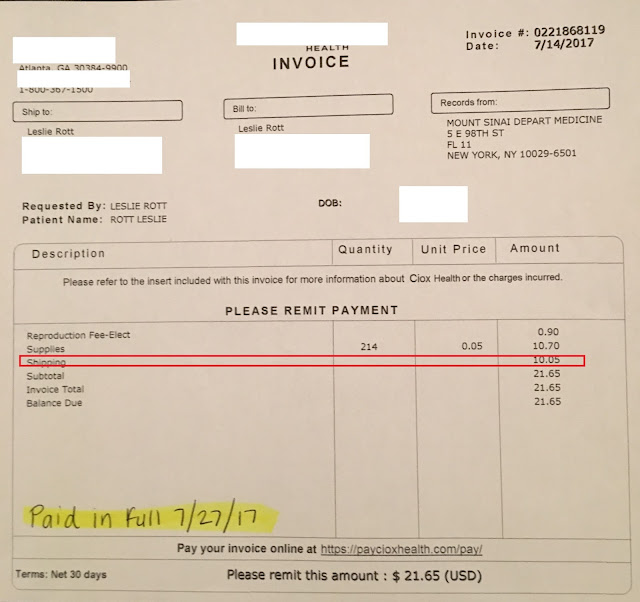 For the Mount Sinai records, I was charged over $10 for priority mail.  The records could have been mailed cheaper, I have no doubt about that.  But I had no choice in the matter.  They sent them how they sent them, and made sure the bill was on the top of the pile. 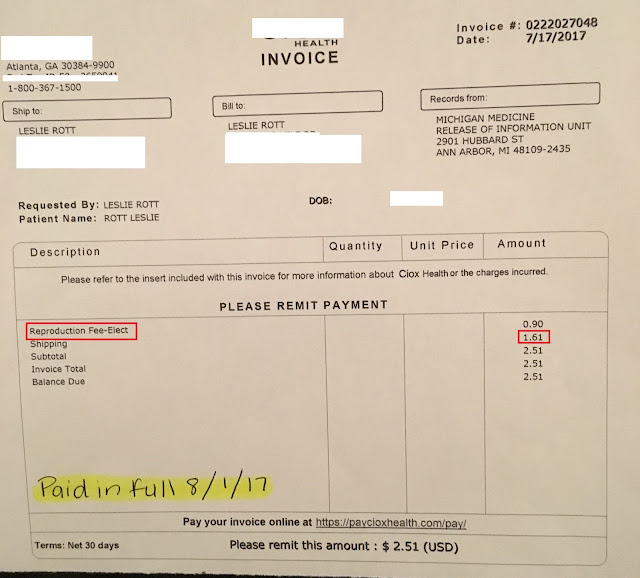 I assume that the records – from a hospital in Michigan and a hospital in New York – both came from the same address in Atlanta because both hospitals use the same electronic medical record (EMR) program.  This protected health information is so protected that information from Michigan, New York, and who knows where else, ends up in Atlanta for printing, and costs me money to ship back to me.  Sounds really safe, doesn’t it?  My information is really protected when it lives in one place and is sent to another place just to copy and mail back.

I don’t understand why these records are so valuable to the people that are charging me for them.  But they are valuable to me.  They are PRICELESS.  I need this information.  And to date, I have found no EMR system that is able to provide the level of information that the actual paper record provides.

Why should I have to pay for the record for services when I’ve already paid high costs physically and emotionally for the services that have been provided?  It’s adding insult to injury.  It’s telling me that someone is more deserving of my information than I am.

And who’s benefiting from this?  Not me.  Not the patient.  Not the person who has to shell out money for the sake of continuity of care.  So I ask why?  Why are companies doing this?  There is no explanation other than making a profit.  Well guess what?  It’s criminal.  It’s profiting off of the pain and suffering of sick people.  And I’m literally and figuratively sick and tired of it.  I shouldn’t have to fight, or pay, to get access to my own information.  No one should.  There has to be a better way.

I guess in reality, PHI really means protecting patients from themselves.  But I don’t want this information kept from me.  In order to be a fully engaged patient, I need to be able to access my medical record.  I fear that what actually occurs is not protection but highly unsafe and poses risks to everyone, and people will suffer even more by not having access to information, that as patients, we so desperately need.  Nothing about us, without us, right?

As far as I can tell, my information can be farmed out to companies across the country and they have an easier time getting their hands on my information than I do.  I should not be obtaining this information on an as needed, or need to know basis.  Having FREE and EASY access to my protected health information should be a right, not a privilege.

Dear Dad, It Has Been Three Years...

I can still remember going out to celebrate my birthday, unaware and carefree.  I remember getting home, seeing pictures of the flood on Facebook, and texting mom to make sure everything was okay.  I will never forget her telling me that she didn’t know where you were.  I’ll never forget the text Molly sent me at 6:00 a.m. the next day, telling me that you never made it home.  I remember calling the Michigan State Police from New York and telling them that they had to look for you, that someone needed to look for you.  And they assured me they would.  They didn’t.  No one did.  Only your family did.  And in the end, the stranger you talked to that night found you the next day.

I do remember getting to Michigan and hugging Molly the tightest and hardest I ever have.  I remember her friend trying to coax her to eat a bite of a bagel.  And I remember thinking that I never realized that 20 year olds could display such compassion and selflessness.

I remember seeing you in your casket.  It’s an image that will never be erased from my mind.  I remember thinking that you looked like you but not.  I don’t remember how I held it together, but I think I barely did.  I couldn’t breathe, I couldn’t think.  The heart takes much longer to process what the mind already knows.

I remember bits and pieces of the service.  Someone told us that they saw a goldfish cracker lying under a pew at the funeral home.  YOU.  I remember a moth flying around the limo on the way to the cemetery.  You were there.  And, in my greatest time of need since you died, you were there.  I know you were, you had to be.  And I have to think that going forward, you will be there even though you won’t physically be there.  In the moments that I need you.  In the moments when I want you to be there.

In three years, so many things have changed…

I graduated from Sarah Lawrence, my then boyfriend and I broke up, I moved back to Michigan, I got a job, I got a new boyfriend, I got an apartment, Bubbie passed away, Molly got into PA school, and Molly graduated from Wayne State.

This is not just a list.  There has been sadness and happiness.  And it has taught me that I can still feel, whether good or bad.

And in three years, so many things remain the same…

I am angry.  And I don’t want to be.  But the efforts I put forth to make your death matter have failed.  And I’ve seen first-hand other families go through what we went through.  Except, in a way, we were lucky.  We were lucky that our ordeal “only” lasted 24 hours.  We were lucky that you were found, even though we will never know what happened to you.

We weren’t lucky that you died, but we were very, very lucky that we had you in our lives for the time that we did.

I love you, Dad, always and forever, 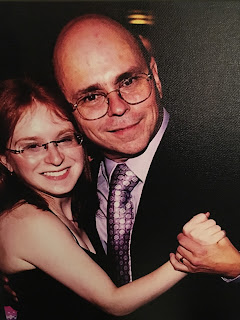 Posted by Leslie at 6:59 AM 2 comments: Links to this post
Email ThisBlogThis!Share to TwitterShare to FacebookShare to Pinterest
Labels: Dear Dad 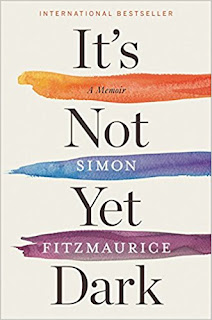 “I was once invisible.  I moved among you, invisible in my disguise. Now I am difference made manifest” (p. 2).

Once I started reading “It’s Not Yet Dark,” I couldn’t put it down.  I didn’t want it to end, even though we all know what the ultimate end to the story will be.

In 2008, Simon Fitzmaurice was diagnosed with Lou Gehrig’s Disease (ALS).  He was given three to four years to live.  That was nine years ago.  In that time, he has lost the ability to use his arms and legs.  He can no longer breathe on his own and relies on mechanical ventilation – a lifesaving technology that he almost wasn’t allowed to have because of his diagnosis.

But he has also gone from having two children to having five.  He has continued his career as a film director.  And he has written this book.

Simon Fitzmaurice wrote “It’s Not Yet Dark” by using eye-gaze technology.  I can’t even imagine the time and effort that went into it, but the result is truly amazing.  It’s written from the heart.  It’s a labor of love.

It’s a feat.  Because the book is rich, lyrical, honest, and poignant.  The author faces his mortality head on because it is his reality.  And it really is all our reality, but for some it is more real than for others.

It is clear that while the author’s body has broken down, his mind has gotten sharper.  I can’t explain it, but the way the story is pieced together, it’s impossible to put it down.  It’s written with an honesty and a clarity that many people never develop.

But the feeling I got from the book, my evaluation of it, isn’t coming from the fact that the author is fighting an incurable, degenerative disease.  It’s because the writing is that good.  It is one of the best books I have read in a long time.

“It’s Not Yet Dark” will be available for purchase on August 1, 2017.  It can be purchased on Amazon.

There is also a documentary of the same name, which you can learn more about by visiting: https://www.itsnotyetdark.com/.  I really hope that I get a chance to see the film.

This review isn’t doing this book justice because I just can’t say enough about it, and my best advice is for you to go ahead and read it yourself.

Do me a favor.  Do yourself a favor.  Even if you have only the time in one weekend, read this book.

“But that was before.  This is after.  Never before had I felt that split, but now a fault line has opened between our past and our present, and there is no going back.  ” (p. 2).

* I received a free copy of this book from the publisher.  However, the review presented here is solely based on my personal opinion of the book.
Posted by Leslie at 7:13 AM 1 comment: Links to this post
Email ThisBlogThis!Share to TwitterShare to FacebookShare to Pinterest
Labels: ALS, Book Review, Read This
Newer Posts Older Posts Home
Subscribe to: Posts (Atom)