What Rheumatoid Awareness Means To Me

So what does rheumatoid awareness mean to me?

It means that the world recognizes that rheumatoid arthritis, in particular, and rheumatoid disease, in general, isn’t just something that happens to old people.  It happens to infants, children, teens, young adults, and middle aged people.

It means that when someone gets diagnosed, they’ve heard about the disease enough to know what it is, what they are getting into, and they don’t have to leave the doctor’s office completely dumbfounded, and go home and look it up on the Internet because they’ve never heard of it before.

It means that it’s no longer an invisible illness.  It’s no longer something that we have to be ashamed of, that we hide in the shadows because of.  It becomes a badge of honor and almost a sense of pride, but not derision or shame.

It means that people realize the legions of us that are out there, and they understand that we are a force to be reckoned with, both in-person and online.

It means that in spite of our illness or despite it, many of us are making it our mission in life to raise awareness because it’s extremely important work that desperately needs to be done.

It means that research keeps being done, and new drugs come through the pipeline, offering us hope, despite our pain.

It means that you can mention your illness to anyone, and they will know what you are talking about.  They won’t ask “if it’s contagious”, or say “but you don’t look sick”, or tell you that “their grandmother has it”, or say that you’re “too young”, or any of the other completely stupid and offensive things that people tend to say.

It means I can talk openly and honestly with people about my illness and not worry that they are judging me or adjusting their expectations to fit a box that might not be accurate.

It means that I won’t have to worry that my future children will develop lupus or RA or some other illness because we will know the cause, and maybe, one day, we will even have a cure.

It means that this is only the beginning. 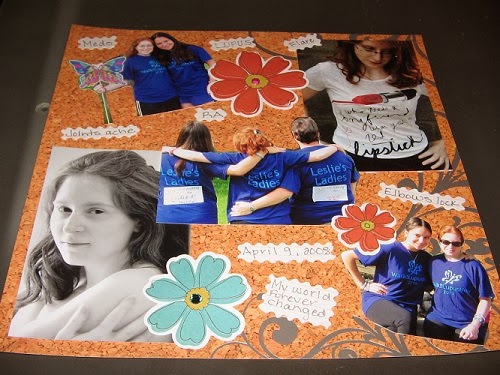 Posted by Leslie at 8:55 AM No comments:
Email ThisBlogThis!Share to TwitterShare to FacebookShare to Pinterest
Labels: Awareness, Community, Rheumatoid Arthritis, Rheumatoid Disease

While I have purchased other medical alert bracelets in the past, Road ID bracelets are significantly less money, seem more functional, and are a bit more durable for daily wear than some of the others I have had in the past.  If you’re so inclined you can also get the silicone bracelet in the awareness color of your illness, as they have a variety of colors and styles you can pick from (if that’s your thing). 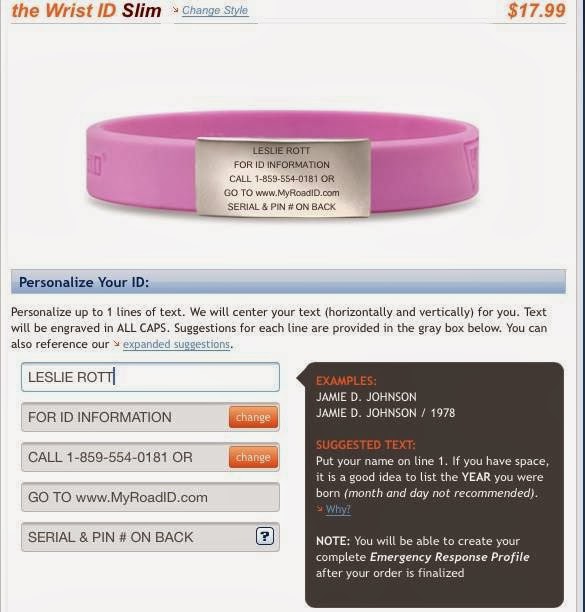 The other thing that I really like about the Road ID concept is that if you purchase the interactive version, which I did, you are able to put all of your information online.  This costs $9.99 a year to maintain (the first year is free and if you purchase additional IDs, you get an additional year included), but you can change and update the information all the time, which is especially great if you have frequent medication changes, additional diagnoses, etc. 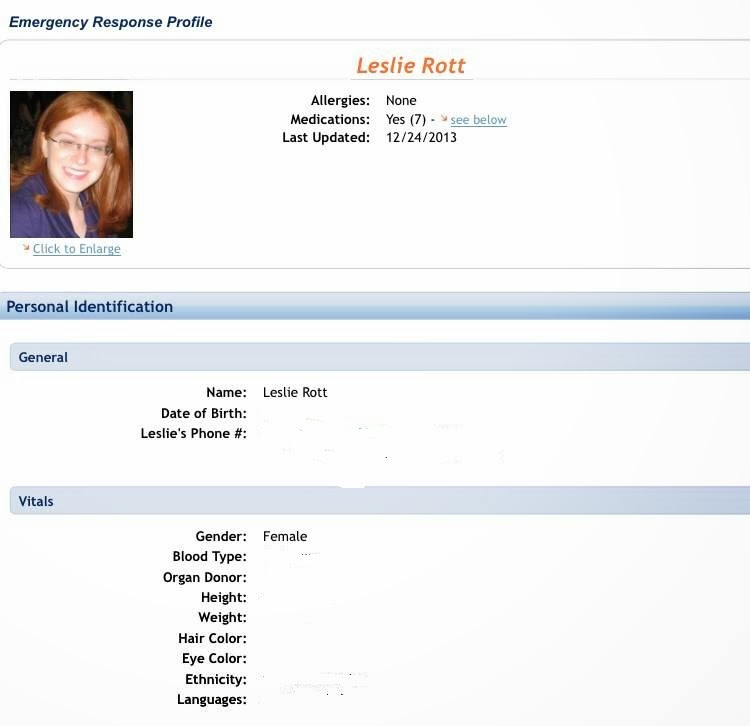 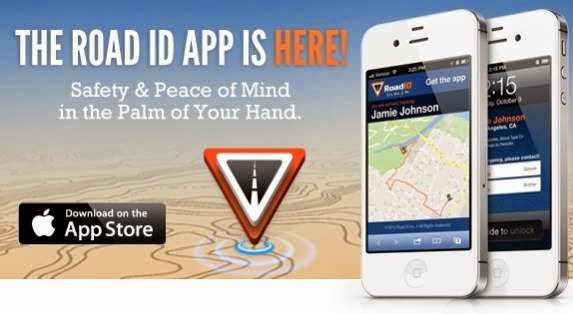 The great thing about the Road ID app is that you can put your ICE – in case of emergency – contacts into your phone.  You can then save your contacts as the special lock screen that the app provides, which includes your name, location (city and state), and up to three ICE contact names, phone numbers, and relationship, and important medical information.

This is really handy, especially considering that it occurred to me that while I have my ICE people designated in my contacts, emergency personnel could not get to my contacts because my phone is locked.  That’s why it is so great to have that information set as your lock screen.  Then you can be sure that unless your phone totally dies, in case of an emergency, those contacts will be easily accessible to others. 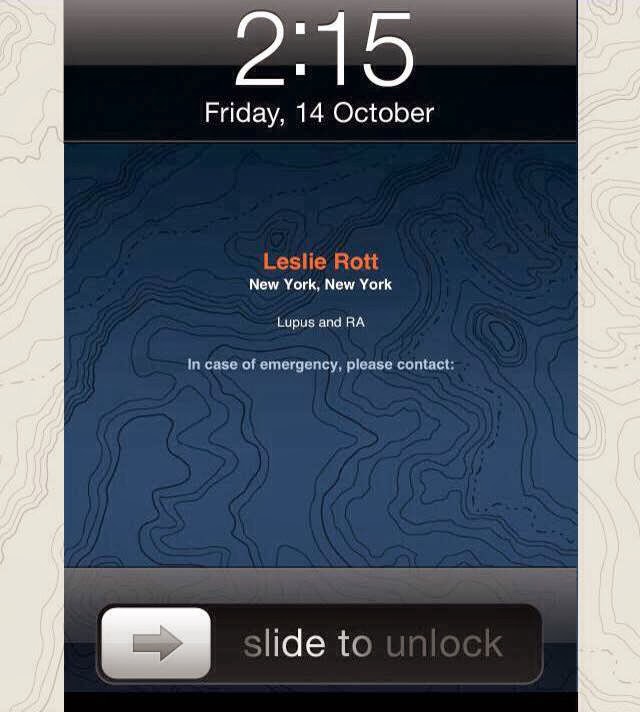 The app also provides something called an e-crumb, in which you can input details about when you are working out so you can notify specific contacts about your whereabouts, and they can track you on a map in real time.  It also has a stationary alert, so if there is no movement detected after a certain amount of time, a message will be sent to any contacts you have listed to be notified.
I tried the e-crumb.  It is impressive and quite accurate as far as location.  Personally, however, I don’t think I will really use the e-crumb, but it’s great for people who are active.  I think the lock screen in and of itself is a great thing.  And I guess it sort of depends on what your goal is.  For someone who is really active and wants to be easily identified if something happens while they are running, it’s great.  For someone who is chronically ill, the lock screen is probably more useful than the e-crumb feature.

I am definitely a convert to Road ID products.  While they were really designed with super active people in mind, I think they are great for those of us who want things for everyday that provide us with peace of mind should anything happen to us.

For more information on all road ID products, visit http://www.roadid.com/.

Thanks to Road ID for giving me the opportunity to share their great products with my readers!

* I had already purchased my own Road ID bracelet, but Road ID was generous enough to provide a $35 e-certificate for one lucky reader of my blog.  I also mentioned Road ID in my Some Of My Favorite (Chronically Ill) Things For This Holiday Season  post.
Posted by Leslie at 8:52 AM 6 comments:
Email ThisBlogThis!Share to TwitterShare to FacebookShare to Pinterest
Labels: Apps, Medical Alert Bracelets, Product Review

Is It More Lupus Than RA Or More RA Than Lupus?

When I began seeing my new rheumatologist, I was worried that she might disagree with my diagnoses. And that’s a very scary prospect. I feel like I’m finally at the point where I’ve made peace with my diagnoses. They are a part of my life and a part of who I am, and I have, for the most part, accepted that. So it was scary to imagine what would happen if I was suddenly told that I have something other than what I think I do.

It’s not that I don’t trust my last rheumatologist, I think it’s just a risk you take whenever you start seeing a new doctor, and this is my first time doing it since I got sick.

So when my new doctor told me that she feels my primary disease is lupus, with secondary RA, I felt a little jilted. This is not how I have viewed my diagnosis. I have tried to view my illnesses as equal, although like I said before, I have steered a bit more toward the RA community.

But why is that? It’s not as if I can measure and quantify the impact of each illness on my body, although I can categorize the symptoms (sometimes).

Is this a game changer? No. Not really.

In some ways, these are facts that I’ve always known. I have lupus AND rheumatoid arthritis. I own those diagnoses.

What I’m not always able to tell is which disease is flaring. And usually I get it wrong. Usually my doctor will disagree with me.

So is there any harm in my new doctor viewing lupus as the bigger issue? I guess not. I guess it’s more of a mindset than definitive, considering that I have always had enough markers to be diagnosed with both illnesses.

And I’d like to think that our memberships in these communities are less tenuous than our ability to fit into a certain illness box. It’s not like I’m an RA sympathizer or an RA imposture. I HAVE RA. And I HAVE lupus. But more importantly, these are autoimmune diseases, and also chronic illnesses. Those things haven’t changed.

So while my last rheumatologist treated me aggressively for RA, my new rheumatologist wants to treat me aggressively for lupus. And maybe that’s the trade off when you have multiple chronic illnesses. Because ultimately, I don’t really care which one we treat, as long as we don’t make the other one worse.
Posted by Leslie at 10:34 AM 3 comments:
Email ThisBlogThis!Share to TwitterShare to FacebookShare to Pinterest
Labels: Chronic Illness, Diagnosis, Doctor-Patient, Lupus, Rheumatoid Arthritis

I contemplated medication changes and opted not to start Rituxan due to the risk of PML in The Mind Is A Terrible Thing To Waste.

I shared my workout journey in Getting The Gears Moving In May.

I got to go to Pfizer’s First Rheumatoid Arthritis Blogger Summit.

I got charged a shitload of money for my medical records in What Happens When Your Medical Records Aren't Yours?

I defended my dissertation and got my PhD in You Can Call Me Doctor Rott.

I moved to New York, which included getting new doctors and new health insurance, and started a new (and hopefully final) educational pursuit in Moving With And Packing Up Lupus and RA: New Beginnings And Bittersweet Endings, Baby Steps And Quantum Leaps, Lupus And RA Have Brought Me Here, What It Feels Like…To Have Lupus and RA In The City, and New City, New Care = So Far, So Good.

And my grandfather passed away, in Reflections On Life, Love, Loss, and Family, which brought up new feelings about being away from home and my own mortality.

And I read and reviewed a bunch of books related to chronic illness:

"In Sickness As In Health" by Barbara Kivowitz and Roanne Weisman

"Your Life With Rheumatoid Arthritis" by Lene Andersen

"In The Kingdom Of The Sick" by Laurie Edwards

"My Foreign Cities" by Elizabeth Scarboro

"Arthritis, Pregnancy, And The Path To Parenthood" by Suzie Edward May

If you are interested in seeing all of the books I read in 2013, go to the “Books I’ve Read” tab of my blog.

For 2014, I have some definite resolutions.  Some have to do with health and hopefully getting healthier:

My non-physical health resolutions are:

-          Have better communication with my boyfriend

I know there are a lot of things here that I hope to do, but I hope that putting them here will make me feel more accountable to actually make these changes or make things happen.

And for the piece de resistance.  Here are the winners of my epic giveaways:

1.       Molly is the winner of the signed, personalized copy of “So Young” by Daniel Malito

2.      Stacey is the winner of a pillfold from Sara Gorman

3.      Melissa is the winner of the Sabi Folio pill holder

If you won, please contact me ASAP– either in comments or via e-mail at gettingclosertomyself@gmail.com – with your contact information.  I’ll be sending out the Sabi Folio.  The rest of the giveaways will come from the specific company, and I will forward your information to them.