Failing As A Patient Advocate (And A Granddaughter)

I’ve been absent from my blog for awhile now.  It’s not because I haven’t had anything to say or write about, but more so because I wasn’t sure how to write about the things I was dealing with, or the things were in the midst of happening and I was trying to privately process everything that was going on.

The most recent thing I’ve been dealing with is the hospitalization, and ultimately, the death of my Bubbie (grandma).  She died November 30, 2016, at the age of 90, after spending almost a month in the hospital.

Yes, I understand that she was 90 years old.  So please don’t provide lame platitudes about how she lived a good, long life.  I get it.  But that’s not what this post is about.  This post is about the complete and utter failure of our medical system, and the fact that as a patient advocate, I stood by and watched it all happen and felt powerless to stop it.

Prior to this hospitalization, my Bubbie was exceptionally healthy for her age.  She lived independently.  She cooked her own meals and cleaned her own house.  She did everything.  We celebrated her 90th birthday in May and it seemed like there was no sign of her slowing down.

However, after feeling tired and unwell for several weeks, she went to the hospital and was diagnosed with pneumonia.  She was put on oxygen and antibiotics.  She seemed to improve enough to go home.  She was discharged from the hospital, without oxygen – which she had never needed prior to this – for a day and a half.

She started having additional breathing issues, and much to her disagreement, we made her go back to the hospital.  We were told that the pneumonia had resolved, and that the doctors weren’t exactly sure what was going on.

And quite honestly, they didn’t really seem to care all that much.  I could tell by the way some of the doctors talked to her that they had written her off because of her age without getting to know her, and learning that she was sharp and clear-headed.  Unless of course she was deprived of oxygen or her carbon dioxide levels were allowed to get too high, and then she became disoriented.

But seriously, they talked to her like she was three years old, and they acted like she wasn’t capable of making decisions for herself.  They talked about her, around her, everywhere but at her.

Part of the problem is that my Bubbie ended up spending so much time in the hospital, and most of that time confined to a bed, which caused fluid to build up and her muscles to weaken, amongst other things.  And we all know that the longer you stay in the hospital, the more likely you are to get sicker.  That’s exactly what happened to my Bubbie.  Although the pneumonia she was originally treated for had resolved between the first and second hospitalizations, my Bubbie developed hospital-acquired pneumonia.

My Bubbie’s own primary care doctor, who was – operative word “was” – also a family friend, failed her because he was able to deal with her when she was healthy and only needed to be monitored routinely, but as soon as she required more, he was nowhere to be found.  He didn’t bother to call once or visit her in the hospital, despite knowing full well that she was there.

And his associate in the hospital was an absolute joke.  When it was explained to us upon my Bubbie’s second admission that the reason she was sent home without oxygen the first time is that she was denied it, I asked the associate what would happen if she was denied it again upon discharge.  Ultimately, we never got to that point, but the doctor told me that it was a good question, but she didn’t know.  That answer was unacceptable and I told her so.

Most conversations that were had were as effective as the previous one.  I wondered why we were having conversations about invasive heart surgeries that neither my Bubbie nor the rest of my family wanted her to go through, when our collective goal as a family, and my Bubbie’s own goal for herself, was to get her home.

When it became clear that my Bubbie likely would not return to her previous state of independence, we were provided with the opportunity to talk to the palliative care team.  This occurred six hours before she passed away.  SIX HOURS.  When my Bubbie was sedated and could no longer make a decision for herself, when it fell on us because there was absolutely no other choice.

These conversations don’t happen when they need to.  Or they don’t happen at all.  I totally understand now all of the stories I’ve heard of people saying that their family member entered hospice just a few days before they died.

Obviously, no one ever leveled with us and told us what was really going on, and what the likely outcome would be.  And this is despite the fact that unless it was the middle of the night, my Bubbie was never alone.  There was constantly a family member with her.  And we still couldn’t prevent all of the failures that occurred.

I will say, the experience wasn’t all bad in that the nurses were incredible during this experience.  They were so kind and attentive.  They treated my Bubbie like she was a person and not like she was merely someone else’s family member.

However, my Bubbie did everything right.  She went to the doctor religiously.  She paid for good health insurance.  Again, up until this experience, she was in exceptional health for someone her age.

It’s hard that she’s gone, but the hardest part is the guilt I feel for not doing more.  This is what I get paid to do.  I failed at my job.  But what’s worse is that I failed my family.  I failed one of the most important people in my life.

I didn’t ask the hard questions.  I didn’t do a good job of shifting the conversation.  I didn’t do the things I felt needed to be done because I wanted to respect family dynamics and didn’t want to rock the boat.  I became passive, and I am not a passive person.

I hope my Bubbie knows how much we love her and that we were there with her until the very end, even when we unknowingly ended up there.  I hope she knows that if we had been fully aware of what was likely to happen, we would have taken her home when that was still an option, when that’s what she wanted, when that’s what we all wanted. 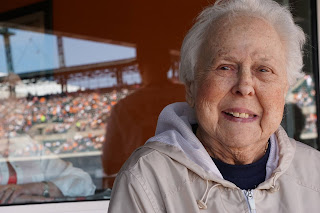