Adding Insult To Injury: What It Means To Be Visible 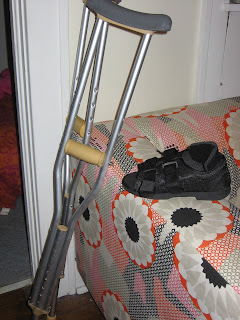 Well, in some ways it’s adding injury to injury.  Just a few weeks after displacing my knee cap and needing physical therapy, I rolled my ankle in such a way that I sprained my foot.  So I am on crutches and in a boot for about the next two and a half weeks.  And of course, it couldn’t be the ankle of the same leg that was already injured.

Lupus? I Don’t Need No Stinkin’ Lupus! (But I Do Need A Small Favor)

(Please read this post to the end…)
Try as I might to ignore it, lupus seems to have another plan for me at the moment.
I am having photosensitivity that is ridiculous.
I wanted to post a photo, but it’s kind of hard to see the red, blotchiness of my skin on my phone camera.
This is in part due to the fact that I hate sunscreen.  This is bad enough as a fair-skinned, redhead, but even worse for someone who has lupus.
I haven’t found a sunscreen that I like, and I suspect that I may be partially allergic to something in it.  If you have any recommendations in this regard, please let me know.  I think I have tried every drugstore brand that exists…
Then there is the fatigue, with a capital “F”.
I think part of the fatigue has been from basically having to start Humira all over again, but part of it is definitely lupus.
My rheumatologist has always said that fatigue is the hardest symptom to treat.  And when it’s the type of fatigue that caffeine doesn’t touch, and it doesn’t matter how much sleep you get, you are still tired, fatigue is definitely an insidious symptom.
I guess this shouldn’t surprise me, because when I first got sick, even when my pain was down considerably thanks to steroids, I was still tired all the time.  It’s one of the first symptoms to come, and one of the last to go.
I have also had significant pain near my bottom right rib.  That’s the telltale sign for me that I’m flaring.
Granted, so far it hasn’t been a massive flare where I can’t get out of bed.  But it’s just enough to remind me that while the Humira is working on my arthritis, lupus is taking advantage of the opening.
And part of it may actually be from the Humira, as one of the side effects is a “lupus-like syndrome.”
This is something that has flummoxed me since my rheumatologist prescribed Humira for me.  I already have lupus.  Why would I want a “lupus-like syndrome” to go along with it?
And given the extreme heat and humidity we have been having, I feel lucky that I am not having a worse flare.
Anyway, this laundry list is my way of confirming for myself that lupus is alive and well in my life.
I have a lot going on in the next month, traveling several places – Martha’s Vineyard by way of New York with my boyfriend and his family, Los Angeles to be in my friend’s wedding, and several trips to my parents’ to secure my bridesmaid’s dress.
I just hope that with all that I have going on, I will be able to keep this flare at bay.
I’ve got enough going on.  I don’t need no stinkin’ lupus.
But I do need a small favor.  If you would, could you please follow the link below and vote for me to receive a scholarship Mayo Clinic’s Social Media Summit?  I greatly appreciate your support in this:
http://socialmedia.mayoclinic.org/2012/07/24/leslie-r-scholarship-contest-essay/
Posted by Leslie at 4:54 PM 5 comments:
Email ThisBlogThis!Share to TwitterShare to FacebookShare to Pinterest
Labels: Humira, Lupus, Social Media

Humira Pen Is Out; Humira Pre-Filled Syringe Is In

For the July 2012 edition of PFAM, I asked readers:

What’s your Achilles heel when it comes to illness?
We all have that one thing that pushes us over the edge, as far as chronic illness is concerned.
What is the one thing, no matter how seemingly minor or severe, that really gets to you?  And what do you do about it?
This topic obviously struck a cord with health bloggers.
I’ll start things off.  In my post, “Small Earthquakes In Humira Land”, I talk about how Humira and the drama that comes with it have, for me, become my Achilles Heel.  Check out this post and others at my blog, Getting Closer To Myself.
Kathy, from FibroDAZE, suggests she, herself, is her Achilles Heel, in the post “My Achilles Heel?  Myself!”.  Kathy’s enviable to-do-list in the post shows what can happen if we overdue it.  We’ve all been there, right?
While in the post, “Stress, AI Disease, and Me: A Work in Progress”, Elisa, of Sjogren’s Style, doesn’t explicitly call stress her Achilles Heel, she tells us that even though she knows stress impacts her illnesses, it is an ingrained part of her identity.
In a post titled “My Achilles’ Heel”, Iris Carden of Sometimes, it is Lupus, talks about running into trouble when she has a few good days and forgets she’s sick.  I can completely sympathize with this.  Don’t we all use the veil of wellness to overdue things?
Elisabeth Greenwood, of Redefining “Good”, talks about the two things that she considers to be her Achilles Heel – hair and sleep.  Read about them in the post, “Patients For A Moment: Achilles Heel”.
Here’s Your Gold Watch – Rheutired’s Annette McKinnon’s talks fittingly (?) about her feet being her Achilles Heel, in the post, “Not the Feet of My Dreams”.
That’s all for this edition.
The next edition will be August 15, 2012, and will be hosted by Duncan Cross (official announcement to follow on his site).
Posted by Leslie at 10:13 AM 1 comment:
Email ThisBlogThis!Share to TwitterShare to FacebookShare to Pinterest
Labels: Patients For A Moment

I’ll be hosting “Patients For A Moment” on July 15th, 2012.
The theme for this edition is:
What’s your Achilles heel when it comes to illness?
We all have that one thing that pushes us over the edge, as far as chronic illness is concerned.
What is the one thing, no matter how seemingly minor or severe, that really gets to you?  And what do you do about it?
For me, it’s Humira.

And make sure you put “PFAM” in the subject line of the e-mail.

All submissions wishing to be considered should be received by 11:59 p.m. Friday,  July 13th, 2012.
Posted by Leslie at 10:30 AM No comments:
Email ThisBlogThis!Share to TwitterShare to FacebookShare to Pinterest
Labels: Patients For A Moment

As luck would have it, at a time when it seems that Humira is controlling my arthritis pretty well, I go and injure my left knee in kickboxing.
About a month ago, I remember my knee hurting more than usual after kickboxing.  While I have never really had significant arthritis problems in my knees, I told myself to wait and see if things improved after my Humira injection.
Things didn’t improve, but since I am so used to being in pain, I walked around with my knee slightly swollen, killing me walking up and down the stairs and while bending down.
I quickly realized that the pain I was having was very different from arthritis pain.  And that the pain was from an acute injury.
I talked to my kickboxing instructor, and he suggested that I give things another week, but that if they didn’t improve, I should go to the doctor.
So that’s what I did.  And now I am going to physical therapy.  They think that there is a combination of things going on, but definitely an acute injury occurred.  The most likely cause is a misaligned kneecap, which has caused inflammation of the joint.
In some ways, I guess there’s something to be said for being “athletic” enough to actually injure oneself by exercising.
On the other hand, there is a lot of frustration on my part that the situation is happening at all.
So where does chronic illness fit in with this?  Well, it’s front and center, as you might imagine.
According to my physical therapist, the injury is being exacerbated by some bad habits I’ve picked up walking with arthritis.
I think we unknowingly make a lot of accommodations in an attempt to reduce pain and increase mobility, but these changes can cause other problems, sometimes to previously unaffected areas.
I am hoping that my knee gets back into shape, and that I will be able to continue kickboxing.
For now, the prescription is icing my knee three times a day, wearing some support tape, and going to physical therapy once a week.
I suppose that things could be far worse than this, but it feels a bit like adding insult to injury, when you have an acute problem on top of being chronically ill.
Like wasn’t one thing enough?
And I’m pretty sure that given my health issues, it will probably take longer for this to heal than it would for some people who don’t take as long to bounce back from things.
As Independence Day approaches, it makes me think about personal independence and what we lose from illness.  I’m lucky in that I can do almost all things myself that I should be able to do.  However, given this injury, it’s not hard to see the slide that can occur.
It’s also a hard lesson to learn that I should listen to my body, rather than attributing everything to the same old, same old.  Hopefully I didn’t cause myself further injury by ignoring it for several weeks.
Hopefully this knee issue is a minor setback.
Lesson learned.
Posted by Leslie at 9:57 AM No comments:
Email ThisBlogThis!Share to TwitterShare to FacebookShare to Pinterest
Labels: Chronic Illness, Physical Therapy, Self-Care
Newer Posts Older Posts Home
Subscribe to: Posts (Atom)