Are We All Just Paying To Die?

I wrote a post in September, Doctors Are Part Of the Problem, But They Can Also Be Part Of The Solution, about a terrible appointment I had with my (previous) primary care physician (PCP), in which I was degraded and basically accused of faking my illnesses.

But then the situation got a little bit worse.

BECAUSE I GOT BILLED FOR IT.

Not only that, but it was a bill for $125 for an “extensive physical examination.”

AS LONG AS SERVICES ARE RENDERED.

All I received was a lecture, and a misguided one, at that.  And then, to add insult to injury, I was billed for it.

I still can’t get over it.  Clearly.  The gull of the doctor.  Apparently he didn’t realize who he was dealing with.

I was so angry that I handwrote a letter.  I just couldn’t stop myself.

I’ve included the letter here, both pictures of the handwritten version (which I promptly sent) and the text so you can read it (names have been redacted). 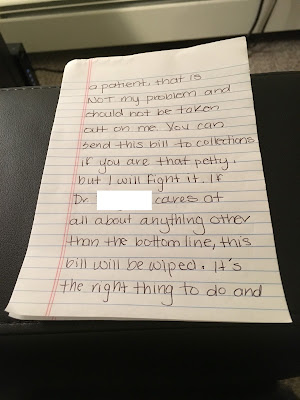 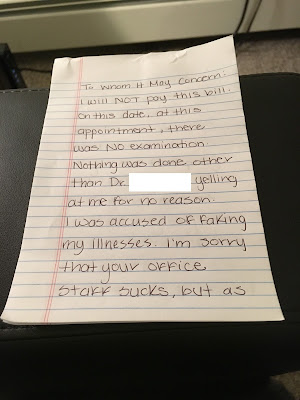 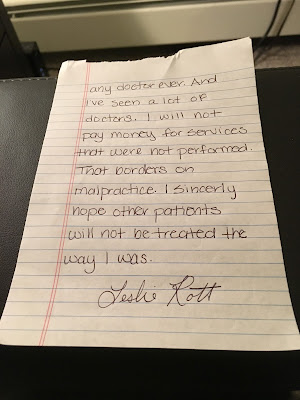 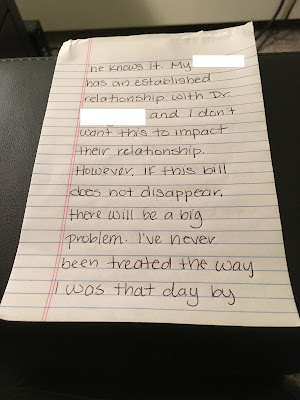 To Whom It May Concern:

I will NOT pay this bill.  On this date, at this appointment, there was NO examination.  Nothing was done other than Dr. _____ yelling at me for no reason.  I was accused of faking my illnesses.  I’m sorry that your office staff sucks, but as a patient, that is NOT my problem, and should not be taken out on me.  You can send this bill to collections if you are that petty, but I will fight it.  If Dr. ______ cares at all about anything other than the bottom line, this bill will be wiped.  It’s the right thing to do and he knows it.  My _____has an established relationship with Dr. _____ and I don’t want this to impact their relationship.  However, if this bill does not disappear, there will be a big problem.  I’ve never been treated the way I was that day by any doctor ever.  And I’ve seen a lot of doctors.  I will not pay money for services that were not performed.  That borders on malpractice.  I sincerely hope other patients will not be treated the way I was.

Should I receive a call from a lawyer or a collection agency, I will be happy to them exactly why this bill will not be getting paid, and why, quite frankly, this doctor should not be practicing medicine.

He ran a variety of tests, including anti-nuclear antibody (ANA), which is a diagnostic test, a confirmatory test, for autoimmune diseases, like lupus and RA.  If he was really curious, this is a test that he would have run when I first started seeing him.  But no.  There’s something cold and calculated about him running that test when he did that makes the situation all the worse. 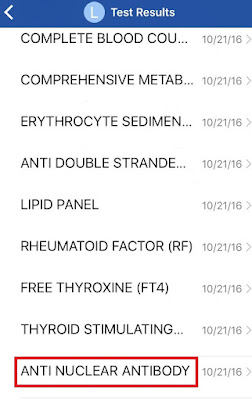 I always knew that doctors like this existed, but I had never experienced one firsthand.

Aside from the moral problems I have with this entire situation, I also have a practical problem.  Unfortunately, sick people need doctors.  I am chronically ill, and as a result of this situation, I no longer have a PCP.  And based on my past negative experiences – although this one being the most negative – I’m not too excited about finding a new one.

But I need one.  And it feels like a lot of work.

So I am left to wonder.  Are we all just paying to die?

Are we all paying to stay well and avoid becoming ill at all costs?  And then when we get sick, are we paying not to die?  Which, in the end, leads to the same, unfortunate, inevitable conclusion?

My Bubbie passed away at 90, and was pretty healthy until almost the very end.  But I watched the end of her life become the most physically and emotionally painful, and also the most costly.  I am 31.  I am not healthy.  So by that calculation, I will pay and continue to pay not to die.  The most costly times, health wise, are still in front of me, and in the end, I will die anyway.

I can only fear that in our fast approaching new political climate, this situation is only going to get worse.  We will get poorer quality services at a greater cost to us.  And in the end, we will be sicker for longer, and we will die, sicker.

We’ve already seen what happens when people in power use it against those who do not have that same power.  I’m not trying to get political here.  But I am using my voice.  And unfortunately, even though one of my New Year’s Resolutions for 2017 is to get un-angry and to focus on the positive, one power I do have is not to stay silent and to expose medical “ills” where I see and experience them.  Therefore, I am sharing this experience, despite the fact that very little good can be found in it.

Because doctors like this are not doctors at all.  They use their power for evil instead of good.  They give the medical profession a bad name.  They make patients feel badly about themselves, they accuse patients of faking their illnesses, when they, themselves, in fact, are playing the system.  They are charging patients for services they did not render in the hopes that no one will have the time, will be too sick, or will not pay enough attention to take a stand and fight back.   They also make those who are healthy feel that doctors are too cumbersome, so they avoid them at all costs, until they become sick and have no choice.
Posted by Leslie at 6:42 AM 5 comments: Links to this post
Email ThisBlogThis!Share to TwitterShare to FacebookShare to Pinterest
Labels: BS, Cost Of Illness, Doctor-Patient, Seriously

I lamented and celebrated pharmaceutical companies and pharmacies:

On Building Playgrounds And Baking 1,000 Cupcakes

CVS Pharmacy, We Have A Problem

I struggled with negative emotions:

Moving Forward And Falling Behind

And the lows of chronic illness:

Self Care = Must Care

That Time I Got Manhandled By A Phlebotomist

I celebrated the good things:

And mourned the bad:

When A Friend Dies

Failing As A Patient Advocate (And A Granddaughter)

And I reviewed some cool products:

Of course, these aren’t all of my posts from 2016, although there were a lot less of them than in past years, but these are the ones I felt were worth highlighting.

I’d be lying if I said that the last several years have not been difficult.  I lost an uncle, both grandparents, and my dad over the last four years.  But regardless, I keep on keeping on.

As always, at the end of every Year In Review post, I include a list of books I’ve read over the past year.  This list is much shorter than in the past and includes several that I have read before.  I think I started more books than I finished this year, but here they are:

* Books specifically of interest to chronically ill readers
Posted by Leslie at 7:59 AM 1 comment: Links to this post
Email ThisBlogThis!Share to TwitterShare to FacebookShare to Pinterest
Labels: Year In Review
Newer Posts Older Posts Home
Subscribe to: Posts (Atom)