What Happens When Your Medical Records Aren’t Yours?

For that price, I could pay for 18 appointment co-pays with my current insurance.

I could do a lot with that kind of money, but I cannot afford to pay that for my medical records.

When I got home one night a few weeks ago and saw a box from a health company in Atlanta, I figured surely that couldn’t be my medical records.  Then I picked up the box and it was heavy to the point where I knew it probably was.  And before I even saw the bill, I had a sinking feeling in my stomach.

I feel like I am being punished because I have a complicated medical history.  It’s insane to me that these people look at this six-inch thick medical record of a 27-year-old, and rather than wonder what my life might be like as it is, they stick it to me even more.

And I was under the impression that if I was going to be charged more than $50, I would be contacted before they went ahead with processing my request.  That never happened.  Because if it had, I wouldn’t have been willing or able to pay that much.

The other thing is that I poured through every page and found nearly 350 pages that were blank, only had the hospital logo on them, or only had the line about “electronic mail not being secure”.  There were 1,202 pages at 0.23 each.  I accounted for those, which included the 350 garbage ones I just mentioned.  But then there were 20 pages at $1.16 each and 30 pages at 0.58 each.  I couldn’t account for those.

But the real question is, besides how I was going to pay the bill is how can I be a responsible patient if my medical records are in Michigan and I’m in New York?

How is it possible that I have to pay for my own medical record?

This is the kind of thing that, as the chronic illness community, we cannot stand for.

We have to speak out when injustices like this happen to us.

And I know I am not alone in these experiences.

When you can’t afford your medication, medical records, or something equally important regarding your health, it causes “good” patients to become “bad”.  It sabotages a patient’s quest for health, and can have deadly consequences.

I waited to write about this until the situation was resolved.  I didn’t want to hurt my chances of a decision in my favor.

Ultimately, I was bounced around between the medical records people in Michigan and the company that copied them in Atlanta.  Maybe if this were all done in Michigan, it wouldn’t cost so freakin’ much.

The person in Atlanta said that they didn’t know why I hadn’t been contacted ahead of time and said they had to call Michigan.  Almost a week went by without hearing anything, so I took matters further.  I knew that the worst that could happen was that I would be told I had to pay the full bill.

So I contacted the Better Business Bureau.  The situation was stressful enough that I didn’t really trust myself to handle getting bounced back and forth, which seemed to be inevitable.

And this is the way a lot of health situations get handled.  You get bounced back and forth, the system hoping that you’ll just give up.  But when you feel you are being disenfranchised, you can’t just give up.  It allows the system to perpetuate the problem.

This isn’t even really about this one incident anymore.  It’s about the fact that the financial burden of health-related expenses is making it impossible for some people to take care of themselves.

So fast forward five years later, I am alive, but being financially raped to gain access to my own medical records.  It’s just totally insane and surreal.

It’s never fun to get a bill that you’re not expecting, especially when it’s for paper.  The worst part is that these people know how important my medical record is to me.  And I guess they figured they could totally take advantage because they know I need it.

Because let’s be honest.  Healthy people don’t need their medical records.  And if they do, they aren’t 1,200 pages long.

I think that if you are going to be charged for your medical records, there should be a limit on how much they can charge you.

Ultimately, it was determined that I should have been contacted ahead of time before the order was processed and because I wasn’t, the company changed the bill to $50.

This felt like a huge victory for me.  But the thing is, I probably would not have gotten a resolution if I wouldn’t have contacted the Better Business Bureau.  So if you’re wondering if they deal with medical-financial disputes, they absolutely do.  I’m not for blowing smoke if there’s nothing to blow smoke about, but I do believe in looking out for yourself when companies/hospitals/insurance/pharmaceuticals are taking advantage.  And I very much felt that is what happened in this situation.

So, in case you’re curious, this is what five years and 1,200 pages of medical records looks like.  Enough said. 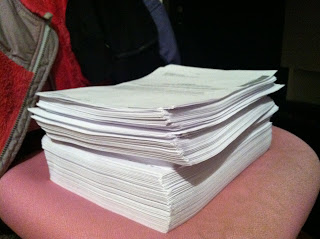 Posted by Leslie at 8:58 AM
Email ThisBlogThis!Share to TwitterShare to FacebookShare to Pinterest
Labels: Advocacy, BS, Bureaucracy, Cost Of Illness, Medical Records