That Time They Went For The Jugular (Literally)

It has been awhile, like four months, which is way too long.  I’ve been computer-less, and still am, but there is so much to share.  Some of the more fun and exciting stuff will be saved for other posts.

For now, I’m taking you back to November.  To my foot surgery.  To my first surgery since being diagnosed with lupus and RA (not including the gum graft I had in November of 2016).  I feel grateful that I went almost a decade of living with these diseases to have surgery.  But I feel like it stole a part of me.  I stepped over an invisible line, and now I can’t go back.

The surgery itself wasn’t horrible.  The day after was.  I’ve never been in that much pain.  It felt like someone was repeatedly lighting my foot on fire. But the worst part of it occurred before the surgery actually happened.

I have “bad” veins.  That has always been the case, but it has become more and more apparent the longer I live with multiple chronic illnesses.  The nurse that prepped me for my surgery tried three times, to no avail.  She went and got the anesthesiologist.  He came in and asked if they had ever gone in my jugular for an IV before.  I stated that no one had ever done that before and I didn’t even realize that was a thing.

The anesthesiologist asked if he could try and get the IV by going in my jugular.  I didn’t really have a choice.  But if he wouldn’t have gotten it, I would have gotten off that table and run away, ass flapping in the wind.  And I never would have looked back.

But because I let him, I keeping looking back and back some more.  At this point, I would say that I have medical PTSD.  Part of the reason is that after going through foot surgery, having four screws put in my foot that will remain their permanently, and several visible scars, what remains is the IV in the jugular.  That’s what sticks out to me from the whole experience.  Not only sticks out, but troubles me deeply.  It was traumatic.  My stress level was through the roof. They did numb my neck first, but that was more needle sticks.  I heard the anesthesiologist warn my mom before they let her come in the room that they had inserted the IV in my neck, and not to be alarmed.

When my doctor got to the surgery center and came into the room, he said I was only the second ever patient of his to require an IV in the jugular.  Lucky me!  But the reality is, to have someone that has “bad” veins under normal circumstances not be able to eat or drink for 12 hours, what do you expect to happen?

This chronic illness journey is a crazy one, and while I am grateful to have gone nearly a decade without a major surgery, I hope I don’t have to have another for a long time.  I will need to have my left foot done eventually, but since I am not currently in pain, I see no reason to rush it.  My right foot was another story.  I was in pain all the time.  Now, I still have pain from the surgery, but no pain in the areas the surgery was supposed to help and that we’re in significant pain before the surgery.  So I guess that’s the win.  And I guess that as for the emotional stuff, time heals all wounds, even wounds in the jugular. 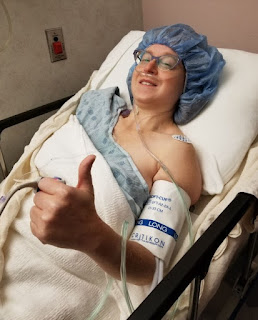 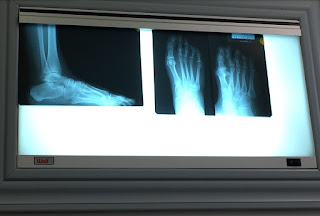 Before
Notice how my big toe is bowed from the bunion and my nasty hammer toes. 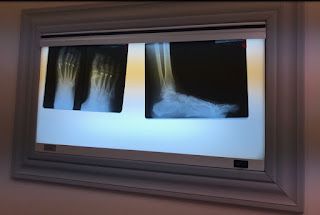 After
Note the screws 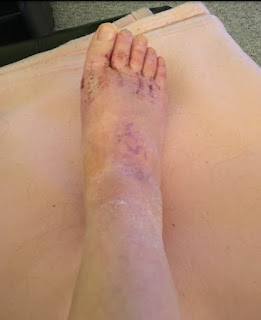 This was many weeks after the surgery, still in rough shape but no longer needed it wrapped. 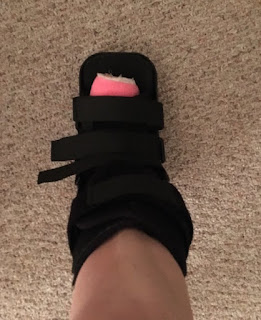 Locked and loaded
Posted by Leslie at 7:45 AM
Email ThisBlogThis!Share to TwitterShare to FacebookShare to Pinterest
Labels: Joints, Medical PTSD, Rheumatoid Arthritis, Surgery