I have been blogging for over eight years now.  I’ve had my fair share of negative comments and people disagreeing with me over things that I have written.  That doesn’t bother me.  Just as I have the freedom to say what I want, so do other people.

And this has never been a problem.  Until now.

But what I have experienced over the last several months goes beyond negative comments and criticism.  These comments hit below the belt, and quite frankly, they are not true.  And they make me sick. 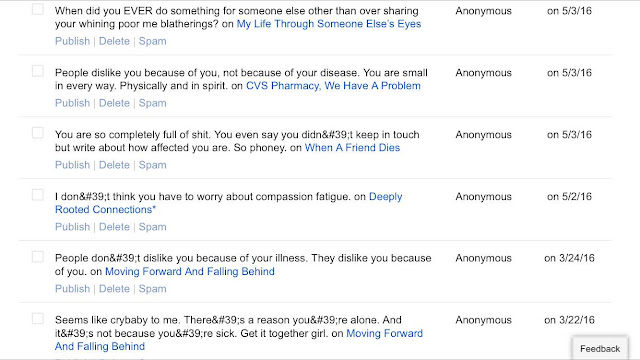 I can’t imagine that anyone in the chronic illness communities I am a part of would make comments like these.  They would simply not comment or stop reading my blog.  In the eight years that I’ve been blogging, I have never received malicious comments.

I have a pretty good idea about who is making these comments because they mirror things that have been said in the past in other venues (which I have evidence of, as well).  My blog is also the only possible way that this person could get to me at this point.  And it needs to stop.  I went quietly, so it’s time for them to get over it.  It’s time for them to stop projecting their own insecurities onto me.  It’s time to grow up.  And it’s time to leave me alone.

Because if this continues, there will be consequences.  I have already contacted Google about this, and am working on tracking the IP address to prove that the person who I think is posting these comments is indeed the person that is.

Negative comments are one thing.  Slanderous comments that call my character into question are quite another, and this is not okay.

Cyberbullying is real.  And I fear that as bloggers, this is something that we might all face at one time or another.  I never really imagined that anyone would post such nasty comments on my blog, but there are people in this world who thrive on trying to tear other people down.

But I won’t be torn down.  I’m fighting back, and this is the first step in that fight.

Comments such as these are not okay under any circumstances.  And honestly, if you are going to write comments like this, at least have the courage not to stand behind the veil of anonymity.  Because you’re not really anonymous.  I know exactly who you are and I’m going to prove it.

Cyberbullying is a crime, and is punishable by law.  So whoever is doing this, for your own sake, stop.  It’s not really worth getting in trouble over.  Worry about your own life, and let me worry about mine.
Posted by Leslie at 7:43 AM 7 comments: Links to this post
Email ThisBlogThis!Share to TwitterShare to FacebookShare to Pinterest
Labels: Blogging, Cyberbullying, Negative Comments
Newer Posts Older Posts Home
Subscribe to: Posts (Atom)