Insurance Is Preemptive, Except When You Need It

For many people, insurance is preemptive, it’s for the what ifs in life.  What if I’m in an accident?  What if I’m diagnosed with cancer?  The list goes on.

But for me, and most other chronically ill people, having insurance is vitally important.  It’s not for the what ifs but for the right now.  I didn’t ask to get sick, so it’s frustrating that there are so many hoops to jump through, not only to prove that you deserve help, but also that you aren’t playing the system. If you know someone who is hard up enough to fake having lupus or RA, will you please hit them in the head for me?

When I first got sick, I had amazing health insurance.  Because I was a graduate student and teaching, I had faculty level insurance.  I had no premium, and very small co-pays.  And truth be told, a small reason as to why I stuck out my PhD program was that I had insurance that allowed me to walk into any of my doctors’ offices, have any tests and procedures they required, and I never had to worry about what it was going to cost me (and my parents didn’t have health insurance at the time).  I think the biggest amount I ever owed at one time with that insurance was $75.

My student health insurance wasn’t the greatest.  I needed referrals for everything.  I paid a $3,600 a year premium, which seems kind of high now that I think about  it, and had co-pays, plus I paid 20% co-insurance.  It was a big headache, especially compared to the plan I had in my first stint in graduate school, but it was insurance and it was guaranteed.  The school couldn’t strip me of my coverage for any reason.

Because my current employer is not offering me health insurance, I was without insurance for the month of September since my student health insurance through school only lasted until the end of August because I graduated in May.  And because the Exchange required a letter from my employer verifying my on and off employment with them, I missed the deadline to get insurance starting in September (that’s a whole other issue).

I lived through September on pins and needles.  I was able to afford, just barely, my medications out-of-pocket, and received financial assistance for the one that I couldn’t.  And I hoped and prayed that I wouldn’t need to see a doctor, which I didn’t.

I found a plan that I can marginally afford through the Exchange, meaning that I am getting a great deal on an otherwise expensive plan, but it still means having to really save to cover it every month.  But that’s okay.  I struggled to find a plan that I liked, and more importantly, that my current rheumatologist accepts.  Then, another snag.  My insurance company will be closing as of January 1st, meaning I’m back to the drawing board to find a new plan, and it’s proving a lot harder than I imagined because there are no plans available that are even comparable to mine.  Now why they even let me enroll in a plan for October when they knew full well that they would be folding is a whole other story, and a whole other frustration!

I’m looking at plans where the lowest deductible is $2,000.  While I would quickly hit this, it means that I have to have that money up front in order to pay for it, which I don’t  Most of the plans I’ve seen also have very high co-pays for hospitalizations, for example, $1,500 after deductible.  That’s just not affordable for someone who has a part-time, temporary job, and could become unemployed at any time.  For me, the hospital coverage is for the what ifs.  In the last eight years, I’ve had two hospitalizations.  But as far as my doctors’ appointments and medications are concerned, those are non-negotiable.  I need those if I’m going to live some semblance of a life.

I don’t want to get political here, but there is something fatally wrong with the system. Until now, over the past eight years, I’ve had a variety of coverage, but none of them have put me in danger of not being able to afford my rent.  Sure, my health comes first and in the last eight years of being chronically ill, I’ve had to make some sacrifices, but those were more personal than out of necessity.

I don’t want to sound whiny or like a bleeding heart, but this is a serious issue, and I realize now that I am lucky that this is the first time since I got sick that I am facing it.

Right now I am paying $151 a month premium, my deductible is $250, and my co-pays are reasonable.  So some might say that this is the exact reason for why the company is going out of business.

I wish I could go back to being blissfully unaware, but I can’t.  And I can’t keep quiet because the struggle is real, and it’s real for a lot of people, and not just me.

The other issue at work here is that a lot of employers are keeping employees just below full-time so that they don’t have to pay for insurance.  In my mind, if someone is working 15 hours a week, I get that.  But if someone is working 27, 28, or 29 hours a week, they should be eligible to receive at least something.  In my mind, this shouldn’t be allowed.

I wanted to write this post long before now, but worried that if I posted it in September and put it out to the universe that I didn’t have insurance, something catastrophic might happen.

Stanford Medicine X 2015: This Is My Fight Song

It has taken me a week to recover from Medicine X and my #MedXHangover for me to finally put my thoughts together about my second year in a coherent way.

Last year when I attended Medicine X, I felt totally lost and overwhelmed.  This year was still overwhelming – if Medicine X isn’t overwhelming, you must be dead –
but I went with an agenda.  Or maybe not an agenda, but a plan, that I had and I was determined to see that plan through.  I knew going into the application that I wanted to do a talk; that I wanted to share my story in the hope of inspiring others.  I was so excited to get the chance to speak at Medicine X Ed.

Medicine X Ed was new this year, and it was such an amazing honor, not just to be included, but to have the opportunity to share my story with current and future medical professionals.  My talk focused on how doctors need to take patient’s pre-illness lives into account, and understand that patients’ lives don’t end at diagnosis.  I focused on how I was determined to get my degrees, even when most people were telling me that I should quit school.  I also talked about how the best lessons learned in life happen outside the classroom, and that should go for doctors, as well.

I was oddly emotional after my talk.  With the help of Janice, our speech coach, and the amazing support of ePatient Advisor Hugo Campos, I think I went out on stage and owned it.  But after it was over – and let me tell you, 5 minutes goes fast – I thought I was going to cry.  As I reflected on the moment, I realized that although I am used to telling my story in writing, this is really the first time that I have gone out and laid myself bare in front of strangers.  I left my little bubble, not knowing what the response to my talk would be.  Sure, I’ve spoken on panels before, but I’ve never really shared my story in a medium such as this.  I’ll share here a few of the responses from Twitter, because I was blown away with how my Twitter feed blew up after my speech:

This year, there were some interesting additions, aside from Medicine X Ed.  There was more of a focus on mental health, more of a focus on health as it relates to gender, and an amazing discussion on chronic illness and intimacy.  People with different conditions were also represented this year that I didn’t see last year.

This year, I was so excited to get the chance to room with Britta Bloomquist.  She and I have known each other through blogging for seven years, but had never met in person.  I think we had a great time together.  I also got to see some old friends and make more new ones.


My main takeaways from this year is that much of life is about experiences and not degrees, and the power of the patient story and the patient voice – sharing your story in a way that feels authentic to you.

At Medicine X, I’ve made lifelong friendships in the span of just a few days, and it doesn’t feel weird that we’ve known each other in real life for such a short time.  Despite our different illnesses, the conference brings all of us patients together and creates a cohort of people who share the same goals and aspirations.

Medicine X is more than just a conference.  It’s a Commitment – to being better, to doing better, and it inspires those in attendance to strive to make healthcare better for all.

So the million dollar question is whether or not I will be back next year.  Going into this year, I was convinced I would not come back for a third year.  But I have so many ideas for next year.  I have drank the Medicine X Kool-Aid.  So I’ll keep you posted on that!

Once my Ignite video and talk are up, I will make sure to post it here, as well as on social media because I am looking forward to sharing it with you!  And for many of the people who I got to meet at Medicine X but who weren’t at Medicine X Ed.

For now, you can check out the Just Talking Podcast, which shares some of our reflections about Medicine X: ABOUT STANFORD MEDICINE X 2015. (Thanks Chris for including me!) 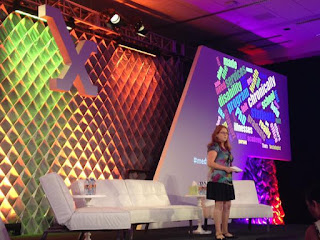 “[…] This is my fight song
Take back my life song
Prove I’m alright song
My power’s turned on
Starting right now I’ll be strong
I’ll play my fight song
And I don’t really care if nobody else believes
‘Cause I’ve still got a lot of fight left in me […]”
Posted by Leslie at 7:16 AM No comments: Links to this post
Email ThisBlogThis!Share to TwitterShare to FacebookShare to Pinterest
Labels: Stanford Medicine X
Newer Posts Older Posts Home
Subscribe to: Posts (Atom)