I Bought A House!

In my last post, I shared about my foot surgery and said that there were several other things that had happened, which I had not had a chance to blog about yet.  So the first is...

I BOUGHT A HOUSE!

The whole mortgage process was super stressful, and having to think so far into the future about what we might want and need, was a lot to think about.

When I went to college, I felt fully equipped for the experience.  But buying a house?  I felt like I had no idea what I was doing.  And three months after moving in, I still have no idea.  But things are finally settling down in terms of getting settled.  And for the most part, I am enjoying it.

I would be lying if I said that lupus and RA did not figure into the process.  They definitely did.  We opted for a ranch.  While not easy to find, I did not want to buy a house that at some point in the future, or even just on bad days, I would not be able to navigate.  I did not want, from day one, to relegate myself to the couch, if I am unable to do stairs.

We also bought the house mid-December and did not officially move in until mid-January.  The last time I moved, I flared massively and had to miss three days of work.  I did not want that to happen again, so we did a slow move.  And it worked!  I did not flare this time!

As far as cleaning, well, 1600 square feet is a lot bigger than the apartment that I moved out of, so it is definitely a big task.  I try not to do it all at once.  At some point in the future, I might consider hiring someone to clean, but for now, we do what we can when we can and try and keep things as neat and tidy as possible.  For me, this is important because I am definitely influenced by my environment.  If my living space is disordered, it makes everything feel that way.  Which leads to anxiety and stress, and if the stress is left unchecked, flares.

The other thing is, I had to set some firm boundaries with my mortgage lender, because of course, everything decided to explode the day before my foot surgery, and I just could not deal.  I had to have my boyfriend step in because it was just too much.  And the calls, texts, and emails any time, day or night, were a lot.  Thankfully, our realtor was very helpful.  And in the end, we got the house of our dreams, so I guess that is what matters, right?

Now that we are on the other side of the whole experience, I do think it was worth it.  I really hope that I never have to move again, though.  The whole process is a lot and there is so much that comes into play that you do not expect or think about.  We got to the point where I was ready to throw in the towel.  In fact, the night we first saw the house, I had a horrible migraine and was trying my best not to pass out or throw up.  So I guess that is how you know you have found one!  If you step foot inside the house with a horrible migraine and manage to keep it together. 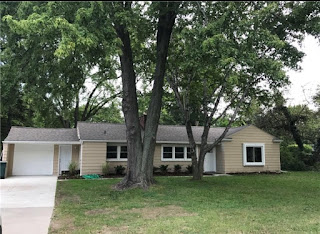 Posted by Leslie at 12:14 PM
Email ThisBlogThis!Share to TwitterShare to FacebookShare to Pinterest