A Blip On The Radar

A routine annual Pap smear turned into a colposcopy, which turned into a laser conization, which taken together has become one of the most uncertain times of my chronic illness life.

When I first got sick, I was in a state of limbo. Doctors who were trying to figure out what was wrong with me stated “it might be nothing or you could be dying.”  It is heavy to live with the unknown.  And somehow, I thought I had experienced enough health stuff not to be surprised any more.  But my body had other plans.

And then you start hearing words and phrases that make you shudder, that truly are the stuff of nightmares: 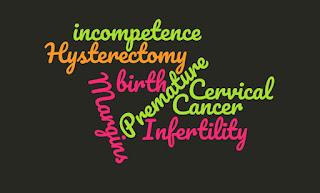 In my head, I have always thought that the decision would be easy.  That if it was my life or having a baby, I would clearly choose my life.  But when the prospect becomes reality, it is not as easy as the times I have played the scenario out in my mind.  It is not as simple as it seems.

And thankfully, at this moment in time, it was not necessary to have to make that decision.  But it forced my fiancée and I to have some difficult conversations, in which I suggested that he get out while he can because things might get harder before they get easier.  For us, “in sickness and in health” is not a hypothetical.  It is as real as it gets.

When you’re growing up, everyone makes such a big deal about getting your period and becoming a woman and how wonderful womanhood is.  But they fail to mention - or we purposely fail to understand - that, that which makes us women, can also kill us.

It is strange because my illnesses are in a very stable place right now, and yet, my body has chosen to remind me that it is fragile, and that having a crappy immune system means being at greater risk for a lot of things, even when I feel reasonably well.  I’ve become accustomed, dare I say good, at dealing with the lupus and RA stuff.  But unrelated bodily stuff, not so much, especially things like this.  These are the things that scare me the most.  Things hiding under the surface that cannot be seen or heard until it is too late.  But I got lucky.  So I get twice as much fun per year for the next two years pending normal Paps each time.

This is the first time in a decade (since I got sick) where I’ve felt like “let’s get this over with and let me get back to my life.”  Since I got the news, it seems like it has overshadowed everything.  Like the uncertainty of not knowing this has been worse than the uncertainty that I first felt when I became chronically ill and was forced into the realization that chronic means never going away.

Sometimes, chronic illness is a minefield of suck.  But hopefully by this time next year, I will be a married woman and this whole situation will be merely a blip on the radar.
Posted by Leslie at 6:57 AM
Email ThisBlogThis!Share to TwitterShare to FacebookShare to Pinterest