The Storm After Years Of Calm 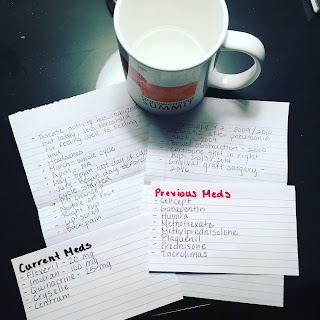 What’s one of your worst fears?

One of my worst fears, for as long as I have been chronically ill, is seeing a new doctor who disagrees with my diagnoses.

My old rheumatologist is leaving the state so I needed to find a new one.  I opted not to stay within the system my old rheum was in because he and I talked about it, and it wasn’t particularly convenient for me proximity-wise, and he had heard of the doctor that had previously been recommended to me by a family friend.  He felt that my illnesses are at a stable enough place where I didn’t need to stay within the same system if I didn’t want to.

I’ve been waiting several months for this appointment.  My hope was to get in while my old rheum was still practicing, but that didn’t happen.

I wasn’t prepared.  Not by a long shot.

Questions being thrown at me rapid fire.  Asking me why I had listened to my previous doctors, all the while expecting that I am going to listen to everything this new doctor is telling me.

It felt the same.  Almost.

Except that back nine years ago, I was on a quest for answers.  And now, this one appointment has seemingly refuted or called into question everything that, that appointment nine years ago sought to make clear.

This appointment was 50,000 times worse because this doctor refuted the last nine years of my life.  Like it’s a lie.  Like it’s some kind of joke that I haplessly fell for.  Nine years.

Nine years of experience can’t be wrong, can it?

I know how I felt then.  I know how I feel now.  I know that I’ve been on a lot of medications that did not work.  And I know I am currently on a regimen that is keeping me feeling reasonably well.

Basically this new doctor is saying that I may have lupus and RA, but I may not.  And that she is 100% sure – from NOT looking at my records, not having any current labs or x-rays – that I have fibromyalgia.  But as for the rest, it’s up in the air right now.

It’s not like being told you have cancer and then someone saying that, actually, you don’t.  That is probably the kind of news that most people in that situation would be glad to hear.

It’s not as if lupus and RA are small potatoes.  I would love not to have these illnesses, or any illnesses at all, for that matter.  But I do.  And I’ve been working within the confines of these diseases for nine years.

Everything makes as much sense as it seems life ever makes with lupus and RA.

Take that away, and who am I?  I don’t know.  The hurt and confusion that I’m experiencing right now is deep.

I’ve felt lucky that I had labels to put on my diseases and that I had concrete evidence for having those diseases.  Is it possible that my lupus and RA are in clinical remission, but I’ve developed fibromyalgia secondary to that?  It wouldn’t surprise me, if, after spending so much time in pain, that my body misreads the pain signals and creates pain even when it’s not actually manifesting in my organs and joints.

But to say that I don’t have lupus and RA at all and that I never actually did?  I truly don’t know what to say to that.  It’s incomprehensible.

I’ve built the last nine years of my life around these illnesses, and for that to be taken away?  It’s unexplainable.  It’s devastating.

I’m not a science experiment.  You can’t just act as if what I’m telling you and what I’ve experienced doesn’t matter.  I know my body better than some doctor that I’ve never seen before and who literally knows nothing about my history.

So maybe at our next encounter, maybe I will stand up and fight harder.  But I was so taken aback, so crushed, that all I could really do is sit there and shake my head.  Like is this really happening?

I got beat down.  And I slowly have to get back up.  I’m trying to convince myself that no matter what, I belong in and to the autoimmune disease community and that all of the work and advocacy I have done over the last nine years matters.  And it breaks my heart to think that, that might not be the case.

The worst part of the whole interaction was that there was no care or concern.  It wasn’t that this doctor seemed genuinely concerned about me being on medication that I don’t need to be on or that I had been treated unsuccessfully for two diseases for nine years and now it was time to find answers.  It seemed like she just wants to be right.

And I’m not convinced that she is.

And I have to wonder about her end game.  Does she want me to go off of my meds to see what happens and how I and my labs look without my current medications?  I don’t think I will be functional for a week without them.  I’m not sure I’d even be functional without them for more than a day.

Maybe it’s too soon to be writing this post.  None of the labs or x-rays are back.  But I had to get it out.  I had to turn to the one place that I have documented everything since this journey began nine years ago.

I think part of the most insulting thing is that when I was leaving, she handed me three brochures created by the Arthritis Foundation – one for lupus, one for RA, and one for fibromyalgia.  I will read them, cover to cover, only so that I can note down all of the symptoms that I have to prove a point.

But I don’t need them.  And I don’t deserve to be handed them as some consolation prize.  I’ve been doing this for nine years.  It’s insulting that that’s the impression she got of my knowledge of my own illnesses.

But when your bedside manner paralyzes a patient and takes them back to where they were when they had no clue what lupus was and thought arthritis only happened to old people, that’s a problem.  When you take someone who is stalwart at advocating for others and cause them not to be able to advocate for themselves, that’s a problem.  And honestly, that’s on her, not me.  So let’s get one thing straight.  I am not that scared 22 year old that I was when I was diagnosed.  I’m a stronger, better person than I was then.  And I need to muster my strength because apparently, I’m literally and figuratively just getting started.

(I had originally planned after the appointment to try my hand at vlogging, but that’s not happening because I would just be a hot, crying mess) 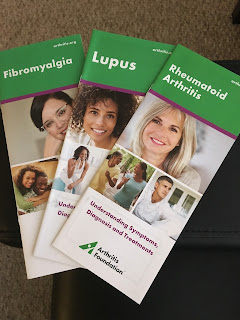