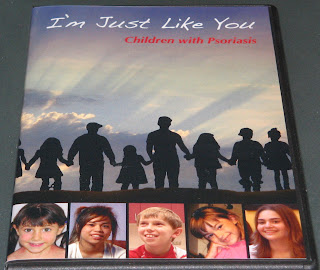 In commemoration of World Psoriasis Day, which is October 29, 2011, I am reviewing the documentary, “I’m Just Like You – Children With Psoriasis,”* and hopefully helping to bring attention to this disease.

I’ll admit that due to my own ignorance, I didn’t really know what to expect from this film.  I knew that psoriasis was a skin disease, but that’s as far as my knowledge went.
You may have heard of psoriasis because of celebrities that have the disease; LeAnn Rimes (who is the current spokesperson for the National Psoriasis Foundation), Kim Kardashian, and golfer Phil Mickelson, who has psoriatic arthritis.
According to the National Psoriasis Foundation, psoriasis is a chronic, autoimmune disease of the skin, and is the most common of all the various autoimmune illnesses.
For some of us, our illnesses are, for the most part, invisible.  And in some ways, we are lucky.  Those who have psoriasis don’t have that luxury.
And this can be very stigmatizing, especially for children.
The film chronicles five families whose lives have been impacted by the disease.
These families have explored a variety of treatments, from naturopathic medicine to biologic medications.  The film not only gives voice to parents and children, it also gives voice to siblings, doctors, and many others.
According to the film, 1/3 of children with psoriasis will be diagnosed with psoriatic arthritis.
The film offers hope to those out there who are affected by psoriasis or know someone that is affected by it.
It also shows the importance of support, from family, friends, doctors, and fellow sufferers, which can impact the quality of life of the patient.  The film helps to bring these families together so they know they aren’t alone.
It also shows the impact that chronic illness can have on children.  Forced to grow up before their time, the children who shared their stories are wise beyond their years, and should be a lesson to all of us.
If you are in the Los Angeles area, the film will be premiered on October 30, 2011 at 3 p.m.  For more information about this documentary, the screening, or to make a donation, visit www.sparklestone.org.
* I received a free copy of this documentary from Bender/Helper Impact public relations, and agreed to review it.
Posted by Leslie at 9:04 AM
Email ThisBlogThis!Share to TwitterShare to FacebookShare to Pinterest
Labels: Children, Documentary, Film, Psoriasis, Review