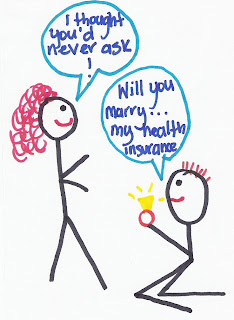 Last year, I saw a story on CNN where a man that had a severe tumor in his neck married one of his female friends so that he could get on her health insurance in order to get treatment, because he didn’t have any and couldn’t afford it otherwise. Quite honestly, at the time, I guffawed. I thought, wow, that’s really sad.

But I never thought that could be me…

And it wasn’t until I read a recent post from Duncan Cross that I actually considered the idea.

I’ve been dealing with a lot lately and have been contemplating taking a leave of absence from my PhD program. Currently, the major roadblock is health insurance. If I leave the program, I won’t have any.

I’m 24, but my parents don’t have health insurance (so I can’t take advantage of any of the loopholes in that sense). And even if I qualify for Cobra, it will certainly end up costing me more than I would make in four months working at a job given that I have a bachelor’s degree in English and sociology. And oh yeah, don’t forget about my pesky pre-existing conditions that got me into this whole mess in the first place…

It’s frustrating because I don’t want the reason that I stay locked into a situation I’m unhappy in to be solely because of insurance. But welcome to America in 2009. That seems to be the way it goes these days…

And I don’t want the reason I get married to be because of health insurance. When the time comes, I want it to be for love. And I don’t want the person I’m with to think that I’m only in the relationship for that. But there comes a time when practicality and necessity trump abstract notions of the way life is supposed to be.

And the thing is, a lot of people get married simply for the benefits that are acquired. Look at Sandra Bullock and Ryan Reynolds in “The Proposal.” Yes, it’s a movie. But they plan to get married so that Sandra won’t be deported, and in the end, they fall for each other. So there’s nothing to say that love as a business transaction can’t work. And if you are seeing the other person at their worst, their lowest, their most in need, well, it can only get better from there…

So, is it likely that I’ll run off tomorrow and elope with the first stranger I meet? Probably not. But the truth is, this is a somewhat practical solution to a real problem. And when it comes down to it, there are a lot of relationships that have succeeded or failed because of less. Many people head into (or end) relationships for completely selfish reasons. The bottom line these days is that everyone is out for themselves. And if you are a person with a chronic illness, insurance is your bottom line. It’s the one thing you, possibly quite literally, can’t live without.

While this post is only a little more than half serious (seriously, it might come to that because it’s almost the easiest solution. I mean, come on, what are the other options?) – my parents would kill me - and I don’t talk about insurance issues often, the current situation is dismal, at best. The fact that anyone in America has to consider this option, let alone utilize it, is beyond sad. It’s a reflection on the richest country in the world seriously failing its citizens.

But given my dismal romantic life as of late, I’ve kind of given up on the idea of love at the moment, but have warmed up to the idea out of economic necessity.

So, the only question left to ask is…