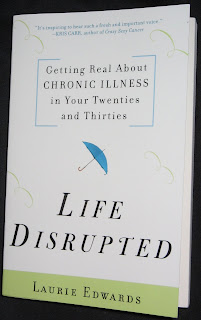 I’m finally finished with and able to post on Laurie Edwards’ book, “Life Disrupted.” First, let me say that I really loved the book and that I highlighted in it like crazy. There was so much that I related to, all in one book, it was kind of uncanny.
*****
“Being well means being able to find a place for chronic illness within the context of our relationships and our professional lives, not at the expense of them” (5).

Laurie obviously knows the importance of words and context, and throughout the book she really helped change my view of the words “well” and “healthy.” There definitely is a difference, and that difference is very important where chronic illness is concerned. I think it is very easy to get caught up in being sick and all that comes with it, but being well and living well certainly aren’t luxuries only for the healthy.

“Despite the fact that many autoimmune disorders and chronic illnesses emerge during childbearing years, such attitudes about illness and age are not uncommon, and they make this journey more complicated. It also compounds the isolating nature of illness – not only are you sidetracked from the majority of your healthy peers by illness, but also you’re further marginalized from the very patient group you can finally claim as your own” (15-16).

I think this is completely true. I know how isolated I felt until I started my blog and realized that, especially in my age group, there were others suffering from chronic illnesses. As I have said many times before – the illnesses may be different, but the experience of chronic illness is very much the same.

I have always been one of those people who got along better with people older than me than people my own age, so for me, getting to know and making contacts with those older has not been that difficult. What has been hard, however, is, as Laurie alludes to, not feeling like I fit in anywhere. Even some of those older have been skeptical of someone so young being ill.

“If any other business operated with such poor customer service, it wouldn’t last, but as patients, we put up with it because sometimes we have little choice” (36).

Props to Laurie for making this point. Any of us with chronic illness knows that the medical system is neither convenient nor easy. It is just one of many aspects of our lives that doesn’t seem tailored to us. Appointments are often scheduled for early in the morning. They are long and tire us out. I know that many of my appointments have been followed by midday naps and emotional breakdowns.

I think it’s really nice that Laurie voices this because it is so true and really needed to be said.

“To say that diagnosis was the crucial turning point is both obvious and deceiving in its simplicity. It wasn’t just that I finally knew what community I belonged to; I could also divide my life into some sort of ‘before’ and ‘after,’ a place where all the unlike pieces finally fit together as a seamless whole” (80).

For me, like many of us, after being sick for so long, more than anything I just wanted to know what was wrong with me. I think there is a ‘before and after.’ And I think, despite how much we don’t want to rely strictly on medical knowledge, the necessity of a diagnosis can torment us. For me, that was all I wanted, and then once I had it, all I wanted to do was to go back to the way my life was before lupus and rheumatoid arthritis.

“Knowing the adaptive styles of our friends and healthy counterparts is just as important as their understanding of our own” (173).

I try to respect people’s boundaries. But it’s a difficult issue on both sides of the street. On the one hand, I don’t think that anyone knows the whole story. A lot of the emotional side happens in private, when I’m alone. I’ve started to come right out and ask people how much information they want. I’ve told them that they’re welcome to say none and I will respect that. Others have told me that they want to know what’s going on, but they’re afraid to ask because I might consider it prying. My philosophy on this is that if my friends ask me about something that I don’t want to talk about, I’ll tell them so. But if the lines of communication aren’t open, or at least clearly defined, it becomes a vicious cycle of don’t ask, don’t tell, and I think there are times when this causes resentment on my side and theirs.

“No one has a market on suffering. Though our perspectives are quite different, the healthy and the sick are entitled to the same empathy and understanding from others when times are difficult” (182).

I can completely relate to this. Earlier this year, one of my friends complained, very dramatically, if you ask me, about having the flu. I almost left the room. It wasn’t that I didn’t feel this person deserved sympathy. It was the fact that at that point in time, I couldn’t have killed for half the sympathy she was getting (for something that was going to go away in a few days). I think part of this goes back to understanding and mutual experience. The flu, my friends could understand, because they’d probably experienced it themselves several times before. My illnesses, on the other hand, were uncharted territory, even for me. But it was a difficult situation for me to handle.
Laurie is definitely right. Life is not a competition for empathy. And while both the sick and the healthy deserve such recognition, I think a lot of times the chronically ill do not receive the empathy and understanding they deserve.

“We put up with a lot on account of our illnesses – embarrassing moments, scary moments, difficult moments. Anyone who is going to become part of our lives has to face the same moments with us” (197).

I wish I could pass on this wisdom to everyone I know. I’ve had a lot of conversations recently that I need to know where I stand with people. I want people to know that they have a right not to be in my life if they don’t want to, because I don’t want to be surrounded by false and only sometime friends. Obviously, I want people in my life, but that means taking everything about me along with that relationship. And I know it is difficult for people my age to understand and accept illness in someone their own age.
*****
There’s so much that I could have included here, but I want you to read the book for yourself. I think there are a lot of great things about this book. There is humor, which I think is definitely needed occasionally when talking about chronic illness.

There are multiple stories represented, which I find crucial. Most of all, there is honesty. What struck me most is that there are things talked about in “Life Disrupted” that shouldn’t ever have to be discussed in life, let alone with and by people in their 20s and 30s. But they are and we do talk about them, not necessarily because we want to, but because we have to as a function of our illnesses.

That said, I think the book is more upbeat than melancholy. It shows that there are people in their 20s and30s living with and surviving chronic illness. It also puts a face on those who are young and chronically ill. The book has a unique way of humanizing the story, making me feel that I am more than a patient number and more than my diagnoses.
*****
(Edwards, Laurie. Life Disrupted. New York: Walker & Company, 2008.)
Posted by Leslie at 7:43 AM
Email ThisBlogThis!Share to TwitterShare to FacebookShare to Pinterest
Labels: Chronic Illness, Read This