First, Senator Pat Toomey (R-Penn) compared people with pre-existing conditions to burning down houses, stating that it’s pointless to insure a house that’s already on fire, and so the same follows that people who are already sick aren’t worth insuring (1).

Then, Representative Mo Brooks (R- Al) said that healthy people are people “who lead good lives” and are those that have “done things the right way” (2).

And you’re probably thinking what the what.  Of all the stupid shit…

So if you’re a sicko like me, I guess that means you’re a burning down house of a bad person.

I know that when I first got sick, I wondered if my life was going to be worth living.  And I wondered what I had done to deserve being sick.  I thought I had been living a life that would keep me from harm.  But I was wrong.  And for someone to suggest that any of us are to blame for our chronic illnesses is disgusting, shortsighted, ill-informed, and just plain wrong.

What I have come to realize over the last nine years is that, yes, my life is worth living.  And no, there was nothing I did or didn’t do that caused me to get sick.  Other than living in this country, that is.  If you’ve seen previews for “An Inconvenient Sequel,” it makes me wonder if living in a country of privilege like America has caused the uptick in autoimmune diseases.  And all of the other money that our government is cutting is just going to make that worse.  But I digress.

This is not the country my great grandparents fled to from violence and religious persecution.  This is not the country where I have had dreams of raising my future children.  The past, present, and future hinge on the decisions that our government will make about us and the worthiness of our lives and our place in the fabric of America because we are sick.

We currently live in a country where those in power think they have the right to say stupid shit about people.  Why?  Because Senator Toomey and Representative Brooks know that most of us with chronic illnesses are out living far better lives than the ones they are.  Minus the money and influence, of course.

Our government is building a wall, people, but it’s not between America and Mexico.  It’s between the healthy and the sick.  And maybe it’s a wall that has always existed.  I know that I have felt envious of my healthy counterparts since the day I got sick.  But the wall they’re creating is a bigger than that.  And it might ultimately mean a wall between the living and the dead.

One day, you’ll get sick.  And while it’s likely that your money will get you farther than my witty banter will get me, it won’t do everything.  One day, your money won’t get you anything but dead, just like we’ll all end up one day.

So here’s a few tips, because having money and influence doesn’t make you a good person.  Neither does being involved in politics.

-         Take a refresher course about how insurance actually works since you seem to be missing the point of it.

-         Stop throwing shade at the people who are paying for your unnecessary vacations while those very people struggle to pay for the medications and medical care that keep them alive.

-         Having empathy and compassion make you a good person.  Putting yourself in the shoes of someone whose personal experience is completely unlike your own and trying to understand their situation is a helpful life skill.  People will like you.  Your mother will be proud.

I am not in politics.  I don’t desire to be in politics.  But I desire to create change.  I want to make the world a better place.  And I think that’s more than can be said about a lot of the people that seem to be influencing our government right now.

Yes, I understand that I feel passionate about this because I am a “sick” person.  I am also passionate because this negatively impacts a lot of people I know and love.  But I’m also passionate because I was once a “healthy” person.  And when I became a “sick” person, I learned that the distinction between “healthy” and “sick” is a tenuous one.  We unknowingly teeter on the border between healthy and sick until we are no longer healthy any more.  Then we are sick.  And for some of us, we never become healthy again.

Jimmy Kimmel is brave.  He’s using his powers for good and not evil.  And yet there are those who are pushing back, who are saying that they do not want to pay their money for his sick child (3).

But this is the way insurance is and has always been.  If you’re healthy, you pay for insurance so that if something happens, you won’t be bankrupt and destitute because of it.  And if you are sick, you have insurance so that your life doesn’t completely fall apart.   The reality is, we will all get sick someday.  And when we need it most, we will want insurance to be there so our lives won’t fall apart any more than they already have.

My today could be some Republican’s tomorrow.  Or anyone’s tomorrow.  No one is immune, literally and figuratively.

I’m lucky.  I know that I’m privileged in that I can stand on a soap box and don’t have to worry about losing my job.  Because my employer knows I’m sick.  They knew prior to day one.  And I’m lucky that I didn’t fear not getting my job because I am sick.  But I know that, that is a reality for many.

So I want to speak for those who are frustrated, angry, and disgusted but do not feel they can publically voice it.  I am mortally scared that employer-based health insurance will no longer be affordable and that I will lose coverage, and as a result of that and my multiple pre-existing conditions, I won’t be able to afford any insurance at all.  And that will render me without doctors and without treatment that will quite likely and relatively quickly leave me in pretty bad shape.  In unworkable and non-functioning condition.

Premiums for rheumatoid arthritis and other autoimmune diseases could rise to $26,580 per year (4).  That’s one of the highest premiums for any disease that isn’t cancer.  And that’s more than I make in SIX MONTHS PRE-TAX (so I don’t actually take home that much at the end of the day at six months).  So I would literally be working to pay for health insurance.  I wouldn’t be able to afford food or rent or my student loans.  And I probably wouldn’t be able to work at all because it’s unclear what spending all that money would get me, other than insurance, which would literally be a plastic card that I could wave around with my arthritis-ridden fingers.

So thank you.  Thank you Senator Toomey and Representative Brooks.  Thank you for saying stupid shit about people with pre-existing conditions.  Thank you for giving us a reason to use our voices and fight for rights that we clearly don’t have but clearly deserve.

(I could have posted this a week ago, but I was going to be traveling and didn’t want to risk the plane being shot down or ending up on the “do not fly” list) 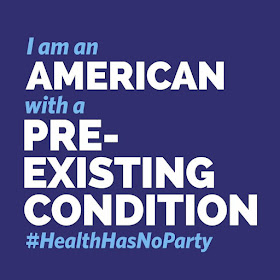